14 Oct, 2017
"Nature and revelation alike testified of God's love. Our father in heaven is the source of life, wisdom, and joy. Look at the wonderful and beautiful things of nature. Think of their marvelous adaption to the needs and happiness not only of man but of all living creatures. The sunshine, and the rain that refreshes the earth. The hills, sea, and plains all speak to us of the creator's love. It is God who supplies the daily needs of all his creatures. The beautiful words of the Psalms 145: 15-16 says "The eyes of all look expectantly to You, and You give them their food in due season. You open Your hand and satisfy the desire of every living thing." So you and I are apart of his creation, we are to have love for one another. As we go through this Sabbath, may we reflect upon love and may we look at nature and know that if God takes care of the plants and animals, he will take care of our needs. Have a Happy Sabbath!
Posted by: Pastors | Tags:

What would you do if you were confronted by demons?

What would you do if you were confronted by demons? Would you resort to obeah or allow the Holy Spirit to take charge? Presenter, Anthony Gordon explored this concept as it relates to ‘Facing the Demons of the Past’ during his second presentation of the series. Comparing the introspection which he frequently encouraged to a surgical procedure, the therapist identified such demons existing in the mind like fear, anxiety, torment which are coloured by emotions such as regret, guilt and shame and which can lead to devastation, destruction and even death.

Painful reflections, idiosyncrasies, flashback, sexual molestation, sibling rivalry and abandonment are just a few of the issues that were exposed as the main factors which lead to results such as paranoia, impaired relationships, maladjustment in life and post traumatic stress disorder. Had it not been for the fool-proof methods of dealing with the demons which were presented, the entire group would have felt hopeless. The Presenter gave the assurance that all the issues outlined could be successfully eradicated if we allow the demons of the past to meet the God of the present.

Solutions were anchored in scriptures such as Philippians 2:5, Romans 12:2 and Psalm 45:2. As we wrestle against the subtle forces which are set at destroying God’s original family ideals we are encouraged to let the mind of Christ be in us so that we can overcome the ‘demons’ that seek to haunt us.

The Family Relational Health Series started with a resounding bang at the Washington Gardens SDA Church on Sunday August 16 at 7:00 p.m. with a refreshing mixture of inspirational singing, teaching, counselling, and interactions between the host and participants.

Presenter, Anthony Gordon a trained Family Life Educator and Counsellor explored the topic, “Family Relational Health a Biblical Perspective”. The discussions were anchored in the text, 3 John 2. The Presenter highlighted the fact that all relationships begin and are continued in the mind therefore it is of utmost importance for our psychological health to be assessed and healing sought if it has in any way been compromised.

The main objective of the series is to raise the bar of the relational health of participants. It was highlighted that building and maintaining relationships require mental muscle, emotional energy, sustained stamina, gripping gait and balanced behaviour however the series is designed to equip the participants with the antidote to cure the major illnesses with which relationships are plagued.

All are expected to benefit tremendously throughout the life-changing presentations of the series and by visiting the Relational Clinic – the first of its kind – on Sunday, August 23 on the church grounds.

GSAT Marathon at the HOPE Centre 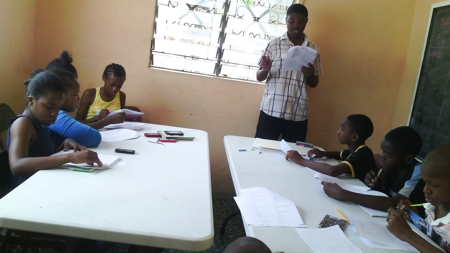 On Sunday, March 15, 2015 the Education Department hosted a GSAT Marathon at the HOPE Centre for the students of the Drewsland Community.  The session commenced at 9:00 a.m. The subjects focused on were Language Arts, Social Studies, and Mathematics.  Because of the smog from the Riverton City and other activities attendance was affected.  Albeit nine eager students and four teachers were in attendance.  The session was highly interactive, informative and well appreciated.  The Education Department expresses sincere thanks to all the parents and contributors who made the session a success.

The night’s message was ushered in by the rich tones of the Eternity Singers’ song, ‘He Still Speaks’. With such a topic, one could expect eerie music and eye-popping revelations about the spirit world however, that was not the focus of the man of God, who quickly laid to rest the fears of anyone who had such an expectation.

His opening text, Ezekiel 37:1 -7 indicated to Bible scholars that his focus would be on Ezekiel’s valley of dry bones which is made popular even in song. He likened the dry bones to individuals who are dead in trespasses and sin and extended the invitation to have God release His wind on them in order for their life to be restored. Scriptural references were use to support the analogy (Ephesians 2: 1&2, John 5:21, Romans 4:17 and 2 Corinthians 1:9)

The similarity of Lazarus’ raising from the dead and what is needed by those dead in trespasses and sin were highlighted:

-The grave clothes had to be removed – Memories of the past must be released.

The reassuring thought that if the valley of dry bones could be made to live again then so too can anyone who is dead in trespasses and sin who avails himself to the working of the Holy Spirit because God still speaks to the dead.
Posted by: Shirley Richards | Tags: God Still Speaks To The Dead, He Still Speaks, Ezekiel’s Valley Of Dry Bones

Where do we go when we die is pondered by most if not all. That question was answered using several scriptural references which speak to the state of the dead. Relatively few persons said they had ever seen ‘duppies’. References were made to Saul who contacted a witch to see a familiar spirit. The Evangelist explained that whatever apparitions  might be seen are only familiar spirits as when a man dies, he wastes away (Job 14:10) and knows nothing (Ecclesiastes 9:5-6). The belief that when an individual dies, his spirit goes to heaven or rises after nine days, was discounted as scriptural references, (John 14:3 and John 21: 19) indicate that there will be a resurrection when Jesus comes.

The great fear that many have for death can be alleviated if we remember that Satan cannot use death to conquer us as Jesus Himself conquered death (1 Thessalonians 4:13-14) and emphatically declared that he is the resurrection and the light (John 11:25). Although it is appointed unto man to die once (Hebrews 9:27) he can be assured that he does not need to face the second death if he allows Jesus’ overcoming power to prevail on his behalf. We were implored to live in readiness for death and the judgement.
Posted by: Shirley Richards | Tags: When We Die, Duppies

Days of Our Lives (Sunday, March 8)

“Like sand through the hour glass, so are the days of our lives”, familiar words for those who watched the sitcom ‘Days of Our Lives’ years ago. A panoramic view of our beginning, descent , death and decay is presented in the Bible. It is evident that as a result of man’s choices, from the first sin, our life has become fragile and slips away much the same way as sand in an hour glass.

The Evangelist highlighted the earliest activities of Lucifer as he engaged Michael in war in heaven and was cast out to earth where he has become the enemy of our soul. (2 Peter 1:4) As the great controversy rages on it behoves us to number our days (Psalm 90:12), recognise that our life is as vapour (James 4:14) and set our affection on things above (Colossians 3:2).

When He Came to the Place (Sabbath, March 7)

13 Mar, 2015
Evangelist, Michael Lewis used an intriguing title to arouse the curiosity of the congregation as he outlined Jesus’ anguish as He made His way to the place, The Mount of Olives and Gethsemane. For most Christians, Gethsemane is synonymous with Christ’s suffering and subsequent death but the Evangelist’s revelation that there were several places so named as the word simply means ‘olive press’ to indicate the place where olives grown on that mount would be crushed to release the valuable oil.
So, Jesus went to that place where He was in deep anguish as He faced the great price of sin and asked His Father if He could remove the cup from Him. Jesus went to the place of separation from His Father so that we can be united with Him in Heaven. We all come to such a place where we are faced with the greatest decision or problem that we will ever face. As Jesus agonised in earnest prayer so too should we, when we come to that place.
Posted by: Shirley Richards | Tags: Christ, When He Came To The Place, Mount Of Olives, Gethsemane

“Some people read the Bible and see words; I see pictures,” explained Pastor Michael Lewis. He successfully enabled the congregation to picture the lives and experiences of the women he focused on during the sermon on Thursday night. Female relationships now and in Bible days were explored through discussions of Sarah and Hagar, Rachel and Leah, Peninah and Hannah and the two mothers, during  Solomon's reign, who claimed one baby. The later was discussed more extensively and used to segue into the metaphor from the Bible of woman representing the church.

With the proclamations of the two women being equally emphatic and convincing, confusion resulted for many. However, Solomon inspired by God sent for his sword which resulted in discovery of the truth. The fact was established that there are only two churches, absolutely no middle ground, and both are emphatic and convincing in their proclamation. We need to use the Word of God (sword) to establish in our minds what is  'truth’ and end all confusion as Solomon did through the aid of the Holy Spirit.

‘The Word of Truth Series’ is geared to empowering all attendees to choose Christ and His way as a result of exploring the scriptures.

At precisely  7:00 p.m., the air at Washington Gardens SDA was filled with the crisp, pronunciation perfect, power-packed melody of the Aeolians. It was significant that most of the songs they ministered were known to the congregation however their unique presentation style made them new to the listeners. Was that the appetizer or the dessert before the start of the main course?

The topic, “There is No God like Jehovah” was explored by Evangelist Lewis. God’s unmatched power as revealed in text after text in the Old Testament were read and discussed. Three attributes of God which were highlighted are: He never stops working, He never stops giving and He never stops speaking.

Our God, Jehovah made the heaven and the earth and He continues to work to sustain us. He gives us everything and more. He speaks to us at our level, He speaks to our situations and He is speaking to us so if we hear His voice, we are urged not to harden our heart.
Posted by: Shirley Richards | Tags:
← Previous 1 2 Next →

We use cookies to personalize content and ads, to provide social media features, and to analyze our traffic. We also share information about your use of our site with our social media, advertising, and analytics partners.