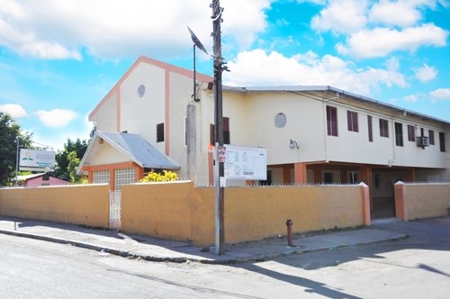 The Washington Garden’s Seventh-day Adventist Church, situated at 41 Headley Avenue, Kingston 20, Jamaica, is a vibrant and flourishing church with over 1,800 members. She is well known for her musical tradition, excellent services, evangelistic outreach and dynamic leadership. Her members are proud to be a part of this dynamic church but how did it come to be?

The church is the product of two Sabbath School companies established during the mid 1950s.  One met on the rear porch of Sis. Florence McNeil’s residence in Maverly led by Bro. C. Hamilton and assisted by Bros. C. Johnson and S. Tucker. The other met on premises of a day school on Seaward Drive and was conducted by Sisters D. Foster and C. Campbell. This Sabbath School was established by Bros. Clifford Williams, E. Francis and W. Watson.  Bro. Sam Campbell, an Elder of the Gretna Green SDA church (now Hagley Park SDA), on the recommendation of his pastor, went there to lead the group.

According to his son Pastor Peter Campbell, Bro. Sam Campbell saw merit in the union of both Sabbath Schools to form a church. After discussions between both groups the idea was accepted and recommended to the East Jamaica Conference through Elder W.U. Campbell. This merger was approved. The enlarged company acquired land at 41 Headley Avenue, erected a tabernacle and established on that spot in 1958 a new church with the name Washington Gardens.  She had 60 charter members that came mainly from the Hagley Park, Kencot and Trench Town churches. Among them were families like the Allens, Tuckers, Fergusons, Lambs and Gladstone “Teachy” Wade. The first pastor was Pastor L. S. Binns and the first Elder was Bro. Sam Campbell.

The church quickly organized and started construction of a new building. In September 1962 she launched her first big drive for funds to aid in its completion and approximately 600 pounds was obtained.  The members worked hard, God rewarded their efforts and on Sunday, March 31, 1963, the church building was dedicated to His honour and glory.

In 1962, the Gemini Pathfinder Club was established under the leadership of Bro. David Hylton. Since then it has proven to be among the best in the West Indies Union. It has been pivotal in nurturing our young people and in developing a number of them into outstanding leaders within the Church and the wider society.

The 1960s saw the rapid development of housing schemes from Pembroke Hall to Duhaney Park and the movement of Adventist members into those areas. As a result the church grew rapidly from membership transfers and evangelistic efforts. These new members included the families of Bros. Flynn, Rowe, Taylor and Sisters Brown, Williams, Lobban, Chambers, Wells, Shakes, McCloud and Hardware.  The members of these families brought rich vitality and a wide spectrum of leadership talents to the church. We were served in the period by good pastors. The first Pastor L.S. Binns was followed by Pastors J. G. Bennett, A. D. Laing, A. G. Hunter, and B. A. Woodburn who left in 1974.

From very early the church began to establish a rich musical tradition. The Tucker and Flynn brothers were talented players and they encouraged the development of musical groups which became drawing cards for many young people. The church had a notable choir and also a quintet called The Golden Bells Quintet (The GBQ) consisting of Cleveland Allen, David Hylton, Gladstone Wade, Errol Broderick and Peter Campbell. The choir, with lead soloists Bro. Malcolm, and Sisters Williams and Diston, excelled in a variety of anthems which enriched our divine services. The youth choir under Elder Dale Flynn, with soloists Audley Weir  and Kirk Clunie attained new heights of excellence. The GMQ quartet consisting of Baron and Patrick Chambers, Dale Flynn and Brian Scott was one of the lead vocal group. Other groups included the Red Rose Trio comprising of Sisters Hyacinth Thomas nee Beckford, Dawn Griffiths nee Chambers and Carmen Walker. Our annual music days attracted overflowing numbers of visitors and continue to do so.

The Sabbath School led by Sis. Ruby Wells and the Missionary Volunteer Society led by Bro. Cleveland Allen and others, prepared and conducted excellent programmes for the edification of the membership. Operation Fireside, a Bible study outreach programme, was initiated by Donald Garrison and conducted in the community by other enthusiastic young people. Bible Class under the leadership of Brothers Campbell and Hamilton and later under Brothers Samuel Flynn and Randolf Rowe were always informative and well attended.

In 1971, Evangelist J. C. Palmer led out in a crusade held at Maverly Park in which over 200 souls were baptized. Washington Gardens was the host church and when the decision was made to establish the New Haven SDA church with the harvest from the crusade, leading members were sent to assist in its establishment and development.

The 1970s and 1980s witnessed continued spiritual development. These activities are chronicled in the article “Evangelism”.

Due to the significant growth in membership it became necessary to expand the building.  With a dynamic first Elder in the person of Marston Thomas leading the church, a supportive pastor in Pastor Ucal Harris and philanthropic contractor in the person of Bro. Harold Priestley, the reconstructed church was completed and dedicated once more to the glory of God, on November 1, 1992.

The 1970s to 1990 was a period, when under God, the work was consolidated and strengthened. Our young people began attending high schools and tertiary level institutions in significantly increased numbers and were graduating at the tertiary levels in a broad variety of disciplines.

The 1990s to the present 2008 have seen the fruitage from the planting of the earlier years. We have had good pastors in Pastors Ucal Harris, M. Jos. Grant, Arlington Woodburn, Lebert Kelly, Whain Graham, Wadsworth McAnuff and Eric Nathan. We have also had good first elders in Bros. Marston Thomas, Clive Bucknor and Lascelles Ellis. Technologically, we have improved our public address system, established a Satellite downlink node, acquired a large projection screen for audio visual presentations and increased our capacity for data storage. We have acquired lands and established thereon a parking lot. We also acquired an adjoining piece of land and hopefully will be offered the remaining lot east of it to enable proper planning for its use. We have established strong family life and community services departments to complement our Sabbath School and Youth Ministry.

This year the Washington Gardens SDA church can truly say “thanks be to God for the inspired leadership with which He has guided His people.” It will not be very long now before the morning. Jesus will come soon and burst the clouds asunder to claim His own. Until then, let us continue to build the foundations so that those who follow in our footsteps may travel safely with us to the Kingdom of God.

A People Connected // Adventist.org from The Adventist Church (Official).

We use cookies to personalize content and ads, to provide social media features, and to analyze our traffic. We also share information about your use of our site with our social media, advertising, and analytics partners.